I once hired a roofer, whom I had never met before, to complete an out of town roof replacement job I received from one of my Property Preservation clients. The work order was for a property on Knox Street, which was approximately 4 hours away. You’ll see the importance of the street name after the next couple paragraphs.

I found this person on the internet and eventually chose him because his advertisement was very well written (much more so than any of the other ones I had reviewed that day). Plus, he was adamant about using his 8 page contractor agreement (to protect both of us, he said) which was also written very well and after reading it I could see that it did not favor either party. Lastly, when I asked him about his “preferred payment schedule”, like I do with all potential subcontractors, he replied that he prefers 50% deposit with the 50% balance to be paid upon completion, which I feel is a fair arrangement for 2 people who have never worked together before.

A quick little side note: I still look for potential subcontractors who have qualities similar to those listed above, even though my pre-screening process appears to have led me astray in this situation, as you will soon find out.

As soon as he got my deposit, the excuses started rolling in. After like a month of giving me the run around, he claimed he completed the roof replacement and would be sending me “AFTER” pictures in a day or two. He sent me an email that day with a half dozen photos showing an Amish crew working on a roof and he had not yet given me a reason not to believe him.

I was actually in the area of this roof job because I had received another out of town job and I figured I would stop by and take the final AFTER pictures so I could get it invoiced. Upon my arrival at the property, I realized that this son of a bitch didn’t even start the roof replacement yet. This was the 1st time anyone has ever tried to send me outright fraudulent photos before. I was shocked.

I grabbed my phone, called this knucklehead and asked when he might be sending me the AFTER photos. I don’t remember his reply to this question but when I told him I was standing in front of the property and that there was definitely not a new roof on it nor was there any evidence that anyone had even been at the property recently, he fell silent for about 10 seconds or so and I wondered if he was gonna just hang up on me.

The response he gave me was shocking and something I’ll never forget. 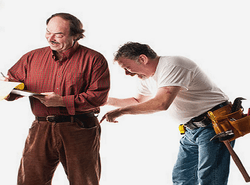 He said to me “I most definitely did replace that roof. But wait a minute. Did you just say you were at Knox Avenue or Knox Street?” I replied that I was at the property on Knox Street. He continued, “I can’t believe it. I replaced the roof at the same address except it was on Knox Avenue. No wonder the lady who lived there kept asking me a bunch of questions”.

I thought to myself: “Holy Shit! Did he really just say that?” And before I could reply, he hung up the phone.

The truth of the matter was that my 2 main roofing crews were tied up on other jobs for at least a week or two and the Property Preservation servicing client who sent me this job was breathing down my neck to get it done.

I thought about what options I had and came to the conclusion that there wasn’t a chance in hell of me locating this idiot if I approached him based on the way I was truly feeling at that moment – my first reaction was a strong urge to find him and “beat my deposit out of him”.

Instead I decided I would have a better chance of talking him into installing the new roof by using his own greed against him. I had nothing more to lose at this point, so I swallowed my anger, I picked up my phone and dialed his number.

I was absolutely surprised when he answered the phone after the 3rd ring.

I immediately told him I was SO SORRY for the confusion with the addresses. I told him I would pay him for both the incorrect roof he replaced at Knox Avenue as well as the roof at Knox Street, if he could somehow get it done within the next 3 days.

He said he would complete the job. Meanwhile, I began looking for an alternative roofing crew because I didn’t think he would actually do it.

A couple days later – the roof was installed and I had my photos. It was a Thursday evening when I received the photos of the completed roof job. I called this jackass and told him that I would be out to the property on Sunday to inspect his work and as long as it was actually finished, I would pay him the balance of what was owed for the original job.

This guy went ape-shit when I told him that. Why? Because he didn’t want to wait 2 days to get paid. This asshole contacted a collection agency on Friday and by the time they called me Monday afternoon, I had already verified his work using an independent inspector.

Approximately 6 months later, I received a call from a detective who worked at the local police department near where this job was located. Apparently, this scumbag had taken an initial deposit from 10 different homeowners and never showed up to do the work. The detective got my contact info from someone I found online and who I contacted while trying to locate this guy.

I still can’t believe that I had to use trickery just to get this shady bastard to complete a roof replacement job that he originally agreed to. One thing I do know is this: After that incident, I learned to always conduct a Google search to learn more about any potential subcontractors, in addition to the screening methods I already have in place, BEFORE actually hiring them. If I had done a simple internet search, I would have found out this guy was trouble before giving him a $1,300 deposit.

The bottom line is – this kind of activity can cause you to lose sleep, lose a client and ultimately, a whole lot of money. So make sure you have a system for screening out the knuckleheads whenever you have to hire an employee and/or subcontractor. And always work to improve your system over time. The crooks are constantly evolving their methods of operation so you pretty much have to adjust your hiring strategy to stay ahead of their games.

2 thoughts on “How I Almost Got Cheated By a Shady Roofer… ALMOST!”